I just finished my first round of testings and something happened in this study, that has never happened to me before – my participants were curious about my study and said they had ‘FUN’. Although they had to do multiple tasks, they only complained about one of them. In all fairness, this task was boring…monotonous….requiring utmost concentration and yes, it was straining. But so is most cognitive research.

A big misconception about research is that if you had fun reading it, the participants probably had fun doing it. Not very likely. If you read that brain scientists found something using fMRI,think about participants in an fMRI scanner having to be very still. EEG can tolerate some movement, but then you have electrodes and electrode gel on your head. Of course, every computer task we researchers design, requires participants to do same thing over and over again till we have had enough trials to do a complicated bit of analysis to then find something we didn’t know before. It’s boring, and in some cases, uncomfortable. 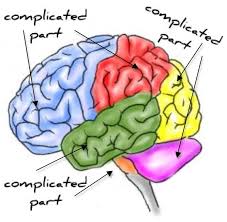 I can safely say that a lot of cognitive studies are not ‘fun’ to do. The brain is complicated To isolate one single thing does requires a lot of work! Think of it this way – how long do you take to make a decision about ‘have I seen this person before’? In some cases, you may immediately be able to tell if you’ve seen him or not. In other cases, you may take a few seconds. However, your brain doesn’t have a checklist of all possible seen items (or maybe it does and we don’t know). So your brain has to

This then requires a whole other set of processes –

Its complex. And we make mistakes. We mis-remember people and things, say the wrong words, are influenced by all those other things in memory that were supposed to be filtered out (he looks like person A, but person A would not be in this part of the country!). This is complicated enough. The mistakes are even more complicated – what exactly went wrong? But of course, every neuron in your brain isn’t probably doing this. So, in the middle of this massive recognition, speech processing, another part of your brain is saying –

So yea, our brain is doing all this, over a few hundred milliseconds, and then, everything changes. We’ve made the decision, said what we had to, now we look at another person on the street, or wonder if the chirping bird is hurt or think of what to eat or all of it together. Now, as cognitive scientists, we just want to study what happens when you recognize people. So we obviously need to find a way to measure just this! We put you in a room with no distractions (boring), make sure you are well fed (boring – i like thinking about food!), show you people you have never seen before (ok, fine) who are not showing any emotion or doing anything fun that you may relate to (boring) and do this over and over and over again (soooo boooriiingggg) till we have enough trials to ensure that anything we find in common, in all trials, is exactly what we are looking for. But that’s still not cool enough, so we need to attach you to electrodes or put you in a machine where you have to sit really still (oh God!).
(In our defense, we do compensate our participants for their time and effort, in lines with the concerned ethics commissions guidelines.)

This was still a good example. Most cognitive studies will just show you colours, or arrows or alphabets, or geometric figures. Neutral faces of uninteresting people looking good in comparison, huh?!

Coming back to, why was my study ‘fun’?

So yea, now you see why in the big boring world of recruiting participants, getting told that someone had ‘fun’ during my research is a big compliment!

P.S. – I should mention now that my study has nothing to do with recognizing faces!

To know more about the life of a researcher, check out my previous posts 🙂

Monday Morning Blues – A researcher’s monday morning blues come on any day! 😉
50 Shades of Research – Everything you will have to do…and more!
I have the…Moves? – Why this blog?